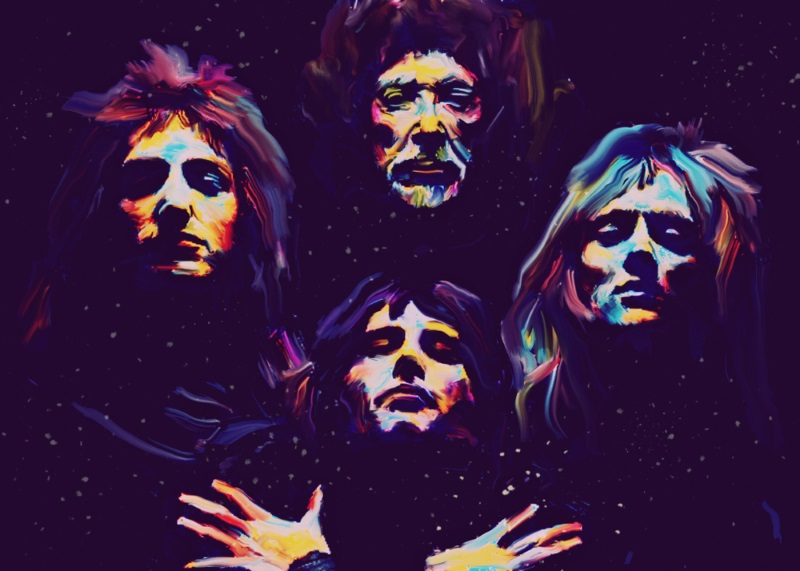 In the end we owe Roger Taylor’s half-French son for the well-known blow movements of Radio Gaga. More specifically, we praise his aversion for the radio expressed in the phrase ‘Radio Kaka’. Taylor immediately saw commercial potential and corrupted the expression “Radio Gaga.” His hit reached the number one position in nineteen different countries. The song has been recorded continuously in Queens live sets since 1984.

Few compositions by Brian May are as heartbreaking as this ultimate rock anthem. The song appeared as the twelfth track on Innuendo (1991), the last Queen album completed by the entire line-up. The song tells the battle that Mercury fought at the end of his lingering HIV infection to keep creating and performing. Incidentally, the album title Innuendo alludes to the rumor about Mercury’s disease, which had not yet been made public. The single came from just six weeks before Freddy’s death and was first played live at the Freddy Mecury Tribute Concert in 1992, sung by Elton John.

The breakthrough hit by Queen was Killer Queen (1974), originating from the third Queen album Sheer Heart Attack. After the small hit Seven Seas of Rhye from 1973/74, Killer Queen was the first top ten in the UK, where the track reached number two. The song also managed to reach the American top twenty, at twelve. Mercury wrote the text of Killer Queen, the story of an ‘uptown girl’ who behaves like a whore, before the complex music parts were written. He was also inspired by the work of the English playwright Noel Coward.

7. Another One Bites the Dust

Another One Bites the Dust is a textbook example of how the greatest Queen hits ever – in terms of sales – were repeatedly driven by the fantastic bass parts of John Deacon. The bass riff of bass riffs, that is This Another One Bites the Dust, a single taken from the album The Game (1980) and the biggest hit ever for Queen. The record sold more than seven million copies worldwide. Deacon’s lick is said to be inspired by Good Times from the disco formation Chic.

Perhaps one of the most powerful Queen songs is this trip to black gospel music. Somebody to Love was therefore heavily influenced by the work of Aretha Franklin. The composition of Freddy Mercury is a single on the album A Day at the Races (1975). Taken together with his predecessor A Night at the Opera, this album shows Queen at the top of his abilities. In his paper Mercury goes in search of the role of God in a world without love. Unique for its time is the layered way of recording on Queen’s night and day record: with just three voices a choir is created, with one guitar a big brass band (as in Seaside Rendezvous).

Again based on a bass lick by John Deacon, Under Pressure (1981) is a unique collaboration between Queen and David Bowie. The song first appeared on the Queen album Hot Space (1982) and immediately became number one in the UK. From 1981 onwards, the song was always recorded in the live sets of Queen. Later Under Pressure also ended up on the album Best of Bowie.

Like no other song in the repertoire, Don’t Stop Me Now proves the deep ties between Queen, Mercury and the LGB community. They wore this relatively unknown Queen song and helped the group out of the flop that the album Jazz (1979) actually was. Don’t Stop Me Now is built around the piano work of Mercury, with May, Taylor and Deacon in a serving role.

Undoubtedly one of the best known Queen songs is the gimmicky We Will Rock You, by Brian May. The song originated from May’s search for a stadium anthem, in which the entire public could participate. Audiences can stomp, clap and sing, May thought, and that is how the unique, tamping percussion and the bald, almost a-capella interpretation that characterize the song came about. We Will Rock You appeared on the album News of the World (1977). In 2009 the track was recorded in the Grammy Hall of Fame.

2. We Are the Champions

Also on News of the World is the second immortalized stadium anthem We Are the Champions. This composition by Freddy Mercury is today the track par excellence for crowning winning football teams in the country and thus became the theme issue of the 1994 FIFA World Cup. In 2011, the attraction of the song was furthermore scientifically substantiated by a large number of musicological researchers. Their conclusion? We Are the Champions is the most catchy song in the history of popular music.

Inaccessible at number one, however, there can be no other track than the flamboyant and slightly incredible Bohemian Rhapsody. The crazy composition of Mercury combines just about all music genres: from ballad and ballet to classical and opera to rock and even heavy metal. The epic, lasting more than six minutes, became an unlikely single on Queens masterpiece A Night at the Opera (1975). In that period it was the most expensive single ever recorded; and until today it remains one of the longest, most ambitious works of popular music. Although criticisms initially varied, Bohemian Rhapsody – partly thanks to the groundbreaking video clip – became an instant success with more than one million copies sold for January 1976. In many countries, the song continues to lead the New Year lists to this day.