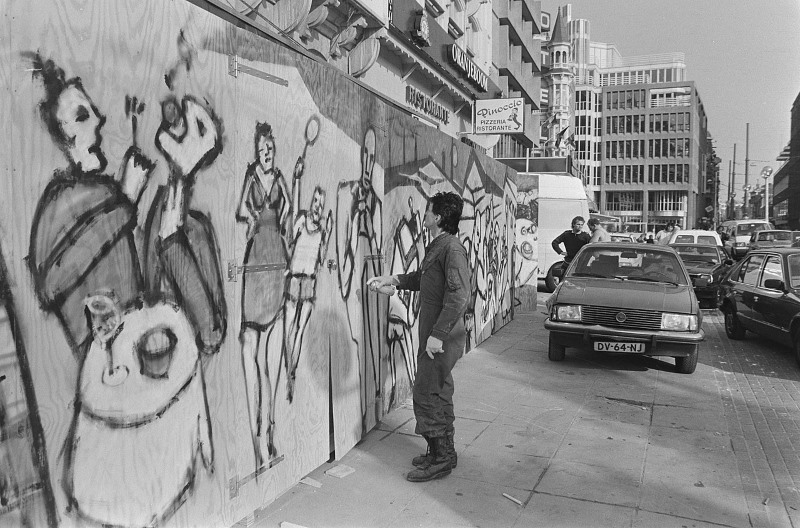 Herman Brood (born 1946) was the Dutch embodiment of the sex, drugs & rock ‘n’ role. He quickly made a name for himself with the band The Wild Romance in the 1970s. In addition, he grew into a renowned painter. At the age of 54 his body was burned out by prolonged drug use and he committed suicide. What are the ten best songs from the Rock ‘n’ Roll Junkie?

The album Go Nutz (1980) was recorded in America with a view to further expanding Brood’s success with “Saturday Day”. The recording process was disastrous and the band was replaced by studio musicians. Even though the album was considered a failure, there were some good rocksongs on it, such as “Love You Like I Love Myself,” a typical Brood song without frills.

The collaboration with Hennie Vrienten from Doe Maar resulted in a big hit in the Netherlands in early 1984. The bass player made great use of his reggae influence. Herman Brood sang about all aspects of the rock ‘n’ roll lifestyle during his career and tattoos could not be missed. Moreover, it gives him the chance to compare the feeling of different types of needles on the skin.

In 1980, Herman Brood had become the most famous rock singer in the Netherlands, a role that he mastered in great detail by performing with pale skin and in black clothes. The single “Hot Shot” is initially his interpretation of the fifties rock “n” roll. As the song progresses, modern ingredients such as synthesizers and soulful vocals are added.

“Street” is the opening track of the 1977 debut album of the same name, which some fans say is simply his best. Brood sets the tone with his band (and extra help from guitarist Jan Akkerman) with an uncomplicated and cheerful rocker in which a prominent role is reserved for the background singers and a wonderfully stirring piano.

Dop sucks is a song from the breakthrough album Shpritsz (1978) where everything fell into place for Herman Brood & The Wild Romance. “Dope Sucks” is a strange song in terms of content, since the most famous drug user in the Netherlands appears to be renouncing narcotic drugs. According to him, it must be about real feelings, straight from the heart. The song is again one of those typical Brood songs where this time a saxophone solo provides an extra boost of energy.

“Never Be Clever” was a single that in 1979 had to bridge the period between two albums. It would be Brood’s biggest hit during his lifetime with ninth place in the Top 40 in the Netherlands. Brood seems to be aware of his image and critics and responds to that with a casual song in which he is not very concerned about what is being said about him said.

With The Wild Romance, Brood always sang in English, the language of rock ‘n’ roll. One of his most famous songs is a duet with Hennie Vrienten that, thanks to the catchy chorus and cynical message, would grow into a true Dutch-language classic. The influence of Vrienten can be clearly heard in the music that hints at reggae with pop influences.

Herman Brood & The Wild Romance were generally at their best when they played up-tempo. “Still Believe” is a wonderful exception to this rule. The ballad has a nice fringing edge thanks to the hoarse voice of Brood and the casual playing of the band. The text is back and forth Brood, he is unlucky at the moment but firmly believes that everything will be alright again. “Still Believe” would first appear on the live album Cha Cha (1978).

“Rock” n “Roll Junkie” soon grew to be the nickname of Herman Brood. It would also be the title of a documentary about the daily life of the singer. Towards the end of the song, Brood even seems to announce his own suicide early. Just like most songs on Shpritsz, it is a simple rock song on which Brood’s fast singing has the best effect. Contrary to what the title suggests, the text is not a description of the junkie existence. Brood is here addicted to the energy of rock ‘n’ roll. He has seen it all pass by – psychedelic rock, symphonic rock, funk, disco and new wave – but it all pales in comparison to uncut rock ‘n’ roll.

The inevitable number one. “Saturday Night” (1978) was the second single from Herman Brood & The Wild Romance. Contrary to what we now think, it was only a modest hit in the Netherlands (23rd place). Internationally, “Saturday Night” would do well, with a 42nd place in the American charts being very worthwhile for a Dutch band. The Wild Romance would tour America to build on its success, although “Saturday Night” would never be matched.
Again, simplicity is the key to success, helped by the catchy guitar run of Dany Lademacher that announces the song, but also indicates the creeping rhythm. Form and content are completely in balance because the atmosphere really evokes the excitement of the start of a Saturday night full of possibilities and fun. A true Dutch rock classic.