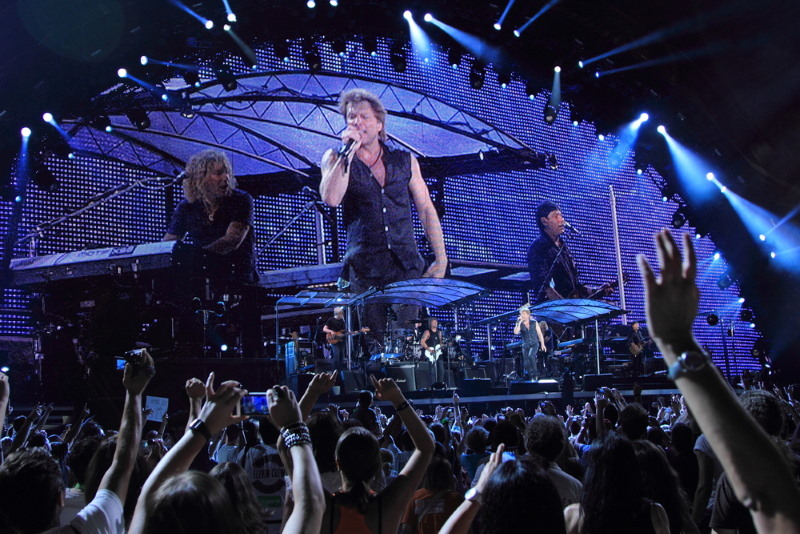 Bon Jovi is an American hard rock band that was founded in New Jersey. In the mid-eighties the band became abecame a worldwide phenomenon with there third album Slippery When Wet and their impressive hairstyles. Since then albums have regularly followed on which Bon Jovi carefully worked on the formula for success. What are the ten best songs from these friendly rockers?

The follow-up to the album New Jersey (1988) would take four years to make. With Keeping The Faith, that had a fresh sound, the band was ready to score hits in the 1990s. The second single, “Bed Of Roses,” was a classic rock ballad, a romantic style in which the band got better and better.

“Blaze of Glory” (1990) was a in between song by singer Jon Bon Jovi for the soundtrack of the western film Young Guns II. It became a mega hit in the United States in particular (the song reached first place.) Technically it is a solo single (with the help of legendary guitarist Jeff Beck) but it is a crowd favorite that is often played live by the band.

A classic power ballad from the New Jersey album. It was the third single from the album and would become a number 1 hit in America. The romantic approach of the song would be further expanded on subsequent albums. “I’ll Be There For You” has grown over the years into a true radio classic.

“Always” (1994) is one of Bon Jovi’s biggest hits, but the song almost didn’t exist. “Always” was meant for the soundtrack of the film Romeo is Bleeding. The band withdrew the song because they did not like the film, after which it was forgotten for a while. “Always” was eventually recorded for the Crossroads compilation and the power ballad grew into an international hit.

“It’s My Life” is a comeback hit from 2000, the hit was a huge hit worldwide. “It’s My Life” is a cheerful sing-along whose positive life message appeals to many listeners. The song refers to Tommy and Gina, the couple who also play a role in their early hit “Livin on a Prayer.”

The album Keep The Faith would mean an important change in the sound of the band (and the haircut of singer Jon Bon Jovi.) The hard rock sound would be modernized and the emphasis shifted more to ballads. The first single from the album proves that Bon Jovi keeps up with the times. Producer Bob Rock, who previously provided Metallica with a more accessible sound, provides an almost danceable basis for the title track. With its catchy chorus, “Keep The Faith” grew into a global hit, also in the Netherlands where it reached the top 10.

The third single from Slippery When Wet showed a completely different side of the band. The influence of country is undeniable on this atmospheric ballad. The text is clearly inspired by the Wild West with its references to cowboys, but at the same time is about the rock ‘n’ roll lifestyle with its long journeys from city to city. In America, it was the third top 10 hit in a row.

After the overwhelming success of Slippery When Wet, Bon Jovi faced the difficult task of equalizing this. The first single from New Jersey immediately showed that the band had succeeded in this. “Bad Medicine” sounds great, everything is just thickened and especially the drums pop like never before. The catchy chorus is perfect for live performances where the whole audience can clap.

2. You Give Love a Bad Name

One of the reasons Bon Jovi made a breakthrough in 1986 was their partnership with songwriter Desmond Child. The first single from Slipper When Wet was previously written for Bonnie Tyler. That song with a different text and title did not become a hit, after which Child decided to rewrite it for Bon Jovi. The result, ‘You Give Love a Bad Name’, immediately caused a sensation in America and would mean the first number 1 hit of the band (in the Netherlands this just didn’t work.) The new Bon Jovi style will be on ‘You Give Love a Bad Name ‘with a catchy chorus, creeping riffs and a sharp guitar solo by Richie Sambora.

The second number 1 hit in their own country remains the most characteristic song by Bon Jovi. Singer Jon Bon Jovi was not convinced of the demo version of “Livin” on a Prayer, but guitarist Sambora continued to believe in it. After the floating bass line was added and Sambora sang an intro melody over his guitar with his talkbox, it was nevertheless put on Slippery When Wet.