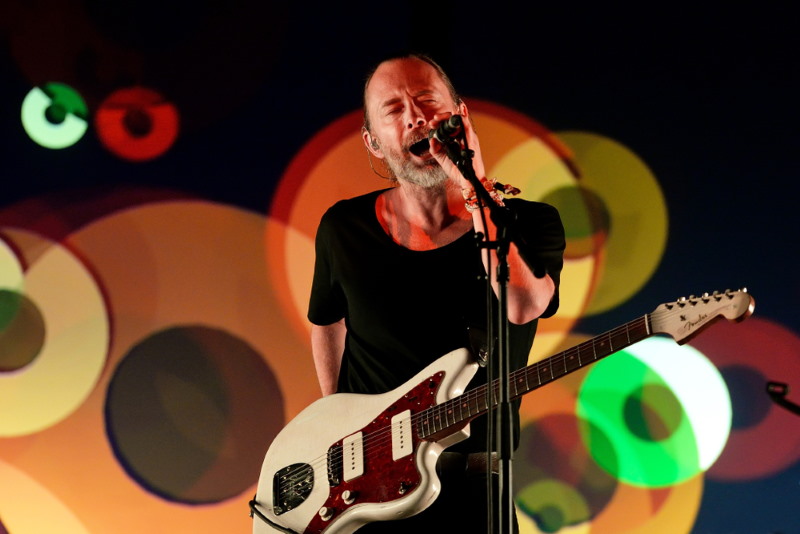 The English rock band Radiohead has grown from introverted indie band into one of the most popular bands of the last 20 years. Stadiums and festivals are sold out effortlessly when Radiohead comes to town. Nevertheless, the band, led by singer Thom Yorke, does not shy away from experimenting occasionally. What are the ten best Radiohead songs?

“No Surprises” was the first song Radiohead recorded for their ambitious OK Computer album, which has since grown into a rock classic. The mood, as always, is melancholic but the group keeps the arrangement simple, almost childish, which makes the effect even more powerful. In the video clip Thom Yorke sings the song with a helmet that slowly fills up with water.

“Reckoner” is the fourth single from the album In Rainbows (2007). The basis is a jazzy rhythm with soft guitar sounds that are added in the middle of strings. The way the melody changes makes it one of the most beautiful Radiohead songs. The band also released the separate tracks of the song so that fans could make their own remix.

Radiohead’s debut single “Creep” was a big hit in the second instance. It became a true national anthem for outsiders and teenagers. The danger was that this would make Radiohead a one-day fly and the band noticed that many people only pay attention during concerts when “Creep” was played. Radiohead refused to play the song live for a while.

The experimental album Kid A (2001) divided Radiohead fans. The band quickly came up with the successor Amnesiac, which was more focused on recognizable songs. The first single “Pyramid Song” reassured many, even though it is anything but accessible. “Pyramid Song” is mainly carried by jazz piano, oriental strings and Yorke’s voice. Despite the dark atmosphere, it became a top 10 hit in a number of countries.

The hard guitars in the chorus of “Creep” gave the impression that Radiohead was a British answer to grunge that was at its peak. That was not the intention of the group and “Fake Plastic Trees” is a clear signal to listeners that they are planning something completely different. The first bombastic versions were eventually developed into a spooky song. Their American record company naturally wanted a second ‘Creep’ and mixed the song without a band’s permission to a completely different number.

My Iron Lung is the title song of the E.P. the was released as a bridge between their debut album and The Bends. The band is limping here on two thoughts, which creates a nice tension between their roots and what is to come. Later Radiohead would no longer use such guitar outbursts as on “My Iron Lung”. The songs together with ‘Fake Plastic Trees’ would make a surprising appearance on the soundtrack of the ironic teenage film Clueless (1995).

The first evidence that Radiohead could last longer than “Creep” was given with the album The Bends (1995). The album ends with the depressing song ‘Street Spirit (Fade Out)’ that would grow into one of the most popular songs of the band. The black-and-white video clip is very intense and was filmed by Jonathan Glazer who would make his name as a film director only years later with Under the Skin.

“Karma Police” was the second single from the success album OK Computer. The title is based on a term with which the group members warned each other in a funny way when they were planning something bad. Even though the song is quite catchy, it doesn’t have a real chorus, which is unusual when trying to score a hit. Radiohead was already so popular at the time that “Karma Police” in the UK could easily reach the top 10. The sinister video clip helped. In the clip, a car slowly follows a running man. Thom Yorke sits in the back seat and looks at it all unmoved. Just when the car prepares to hit the man, he comes up with a trick to escape.

2. Everything in its Right Place

The success of OK Computer was intimidating for the group members of Radiohead. Both psychologically and creatively it was an exhausting achievement. Singer Thom Yorke collapsed mentally and had trouble dealing with music. In the end, electronic music without singing brought salvation. It gave the band new inspiration and this eventually led to the experimental album Kid A (2000). The opening song “Everything in its Right Place” sets the tone with its bare arrangement. Yorke also repeats many words but in a way that is very exciting. Radiohead has since often played the song live in versions that may sound even better than the original.

With the first single from OK Computer, Radiohead made a confident statement. The years before the album came out the band played different versions of “Paranoid Android” live. The final version is six and a half minutes long and consists of four parts, which immediately gives it a classic rock design. The tempo changes a number of times, just like the chords. Textually, Yorke alternates humor with bitter political observations. All in all, not really the recipe for a hit single. A striking video clip by Swedish artist Magnus Carlsson, who only had to work with the instrumental version, brought a solution. The bizarre mini-cartoon that makes the song even stranger was continuously shot by MTV. It was the moment that Radiohead became superstars, without making any compromises and with an exceptionally beautiful song.