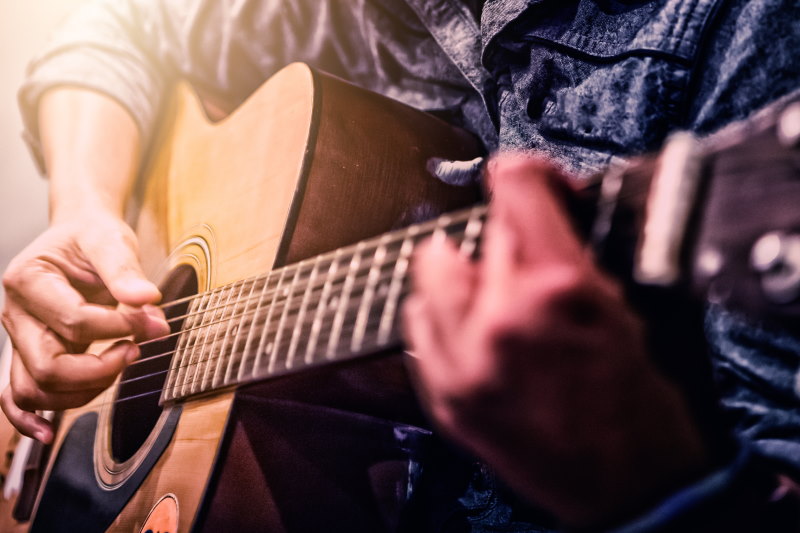 Rock music is unthinkable without the electric guitar, playing at a deafening volume. But while rock became harder, it also developed a softer alternative under the influence of folk music: the song that is accompanied on an acoustic guitar. Ballads about heartbreak or accident. What are the ten most beautiful songs with an acoustic guitar?

10. Metallica – Nothing Else Matters

The fifth album from metal band Metallica, named after the band itself, but better known as The Black Album , constituted a break in style on a number of points. The band had flirted with the ballad form before, but “Nothing Else Matters” continued by omitting any metal influences. Singer James Hetfield knows that the song is different and consciously sings: “Never opened myself this way.” A good choice because “Nothing Else Matters” grew into a big hit.

Eric Clapton has been known for decades as a legendary rock guitarist. Yet one of his most famous songs is played on acoustic guitar. Clapton wrote the song in memory of his four-year-old son Conor who died in 1991 after a fall from a skyscraper. The acoustic accompaniment fits perfectly with the modest vocals. The version that Clapton played for MTV Unplugged, a program that specialized in acoustic performances, may have become even more famous than the original version.

Bob Dylan became world famous as a folk singer who, at the start of his career, only accompanied himself with a harmonica and acoustic guitar. His later switch to electric guitar was seen as a betrayal by folk purists. One of Dylan’s best-known songs is “Blowin” in the Wind, 1962. With its interrogative text and mysterious conclusion, the song became a favorite song during protests for equal civil rights. A key number from the sixties that has been played by countless people with an acoustic guitar.

7. Neil Young – The Needle and the Damage Done

Neil Young made a name for himself as a folk singer in the 1960s. In the following years he turned out to be an exciting guitarist. On the breakthrough album Harvest (1972) his sound is suddenly more subdued thanks to the use of acoustic guitar. “The Needle and the Damage Done” is one of the most honest songs about drug use. Young sings lonely with an acoustic guitar about the havoc caused by heroin in his circle of friends. He was so satisfied with a live version of the song that he just put it on the album.

The American singer Johnny Cash has beautiful songs to his name in which he sings about dark subjects with his heavy voice and acoustic guitar. A year before his death in 2003, he ventured into a cover of the song “Hurt” by industrial group Nine Inch Nails. Cash knows how to turn the song into his own way and turn it into a sombre retrospect of his life. Rarely has an acoustic song sounded so intense.

Fleetwood Mac reinvented itself in the mid-1970s thanks to a number of new members including the couple Stevie Nicks and Lindsey Buckingam. Thanks to the new input, the band would grow into one of the most successful groups of all time, with marital troubles within the band providing beautiful songs. “Landslide” is one of the first contributions from singer Stevie Nicks and grew into a public favorite. Restrained, Nicks sings about the uncertainty she feels about her relationship and the threat of failure as a singer, a feeling that an avalanche will bury her.

This romantic Rolling Stones song from 1973 is often regarded as the ultimate rock ballad. The acoustic guitar sounds intimate and the vocals have fascinated many listeners over the years. It is not Keith Richards who cries softly but a trace of an earlier practice session that Mick Jagger had sung. In addition, people liked to speculate about Angie’s identity. Was it David Bowie’s wife? Keith Richards’ newborn daughter? Or as the author would state years later in his biography, heroin? Anyway, “Angie” would grow into a true campfire classic.

In 1979 reggaester Bob Marley was told that he was suffering from cancer. The following year he would release his last album on which the completely acoustic “Redemption Song” immediately caught the eye. “Redemption Song” is a musical testament in which Marley urges the listener to free himself from spiritual slavery and at the same time concludes that he always sang songs about freedom. An intense personal number that offers universal comfort.

Paul McCartney heard the melody for “Yesterday” in a dream and was afraid for a time that he had unknowingly committed plagiarism. Eventually he dared to make a song of it and it would become a classic, not just from The Beatles but of pop music in general. The simple guidance and the universal theme of looking back on a broken relationship ensured that “Yesterday” was recorded more than 2000 times by other artists.

1 Pink Floyd – Wish You Were Here

The title track of Pink Floyd‘s ninth album seemed to be somewhat hidden away between the tightly produced progressive rock. Very slowly the fame of the song has increased and in recent years it has been considered the ultimate acoustic guitar song. Like many songs on the album, “Wish You Were Here” is about loss, loneliness and especially the lack of original band member Syd Barrett, who left the group after excessive drug use. The acoustic basis of “Wish You Were Here” is fairly easy to play, but Pink Floyd dresses up the song with typical sound effects. This way the song comes up as if it is found by a listener on the radio. Guitarist and singer David Gilmour plays the first chords on a 12-string guitar, followed by a full version on a conventional acoustic guitar.