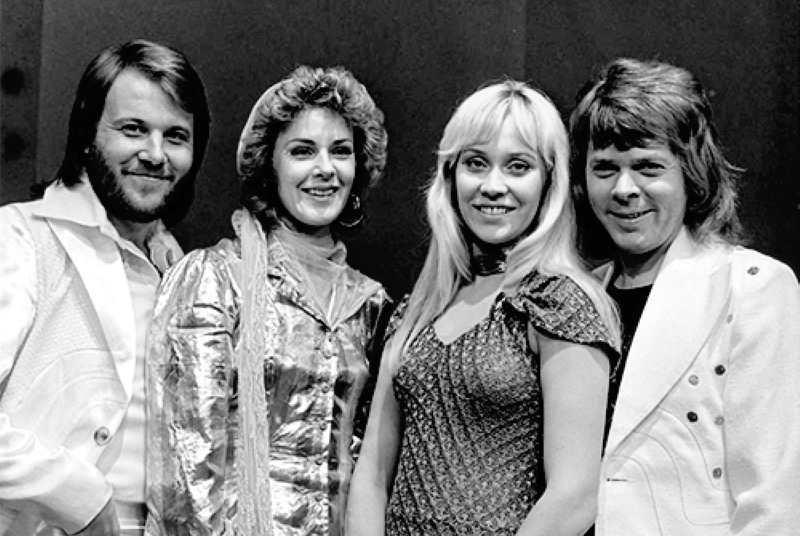 The most successful pop group of the 1970s unexpectedly came from Sweden. After winning the Eurovision Song Contest in 1974, ABBA (Agnetha, Björn, Benny, Anni-Frid) grew into a hit machine selling millions of records worldwide. Yet their catchy pop songs usually had a surprisingly sombre undertone. What are the ten most beautiful songs from ABBA?

After ABBA finished third in 1973 at the national song festival in Sweden, they tried it a year later with the catchy song “Waterloo”. The group gratefully made use of the temporary opportunity to sing in English and came extravagantly dressed on stage. Their international career was launched by winning the song festival. ‘Waterloo’ is now considered the ultimate Eurovision song festival song.

“Eagle” was ABBA’s third single from ABBA: The Album (1977). With almost 6 minutes playing time, it is the longest song of the band. The sound that evokes the flight of the eagle is ambitious and mysterious. Yet the band does not forget its sense of melody, which gives the chorus the unmistakable ABBA touch.

8. The Day Before You Came

The last song ABBA ever recorded is a strange one. The music of “The Day Before You Came” was only played by Benny mainly on the synthesizer. Only Agnetha sings on the song which reinforces the feeling of isolation. With “The Day Before You Came”, ABBA’s melancholy comes to the fore stronger than ever. Agnetha sings modestly about the daily activities of an ordinary woman who experiences nothing exceptional. Yet a big change seems to be coming, although the listener can only guess. Because of the dark tone and the suspicion that the group was entering a different phase, the reception was initially not very enthusiastic. In the end, the song was still a top 10 hit in many countries. “The Day Before You Came” is now considered a masterpiece of the group.

This timeless hit from 1978 is one of the more unabashedly cheerful love songs that ABBA made. “Take a Chance on Me” opens with characteristic a cappella vocals, after which the music start and Agnetha sings the unexpectedly sensual centerpiece. The colorful video clip where the image for each band member is divided into four is probably the best known of the group and was often imitated afterwards.

During their existence ABBA would be increasingly influenced by disco. “Lay All Your Love on Me” is probably their most successful disco songs. It was not released as a single but as a maxi single after it turned out to be very successful in discotheques. Only ABBA could make something like “Lay All Your Love on Me”: a danceable song about jealousy that often sounds almost religious.

5. The Winner Takes it All

“The Winner Takes it All” from 1980 grew into one of ABBA’s biggest hits. In addition, it is generally regarded as one of the best songs about divorce. The group has always denied that the song was about the personal situation in the band (Agnetha and Björn had split up a year earlier). Yet nobody believes that because the painful way in which Agnetha sings exudes a certain authenticity that is difficult to imitate.

The first single from the album Voulez-Vous (1979) would be one of ABBA’s biggest hits. Like many later ABBA songs, Björn and Benny built a beautiful construction with a long structure and a number of unexpected twists. “Chiquitita” is also one of the most successful charity songs of all time. It was used in 1979 for the Music For UNICEF concert and to this day, half of the proceeds from “Chiquitita” go to the international children’s aid organization.

3. Knowing Me, Knowing You

“Knowing Me, Knowing You” is a success song from the Arrival album (1976). In many countries it would reach a top position thanks to the catchy chorus. “Knowing Me, Knowing You” is also one of the first songs on which the characteristic layering of ABBA can be heard. The song initially sounds cheerful but the text “Walking through an empty house, tears in my eyes” betrays a dark undertone. Naturally, the divorce theme is later seen as a precursor to relationship troubles within the group. For years the song was played live by the American rock group The Lemonheads.

A song so perfect that the band members knew in advance that it would be a mega hit. “Dancing Queen” did indeed lead the charts in many countries. Even though the song was to be released a year before the big discourse in 1976, it managed to capture the experience of a young girl dancing on Friday night. It would strangely be the only US number 1 hit in the group.

In a sense, “S.O.S.” is ABBA’s second breakthrough. After the success of “Waterloo”, the group was unsure about which direction to take and initially skipped the song as a single. Then “S.O.S.” would become a hit almost all over the world. No wonder because it is considered by many people (including musicians like John Lennon) to be one of the best pop songs of all time. Where until then ABBA was mainly specialized in cheerful glam rock and love songs, “S.O.S.” announces a new topic: the relationship that is likely to fail. It is therefore not difficult to see a red line running from “S.O.S.” to “The Winner Takes It All”. Musically it is a beautiful bridge between two styles with a subdued couplet that changes from a classical bridge into a chorus-style chorus. The complete ABBA song.